Amazon.com is known for selling wacky products, and there are numerous posts online about the funny reviews they garner. But while doing research for a recent post, we

came across an unexpected plethora of books that almost defy description, and started wondering what it would be like to review truly awful books.   Oh, sure, there’s the Hutzler 571 Banana Slicer, legendary for its funny reviews and dubious utility. And the uranium ore that sells for under $40 and features customer questions like

Uranium ore is NOT eligible for Amazon’s Subscribe & Save program

BIRTH CONTROL IS SINFUL IN THE CHRISTIAN MARRIAGES and also ROBBING GOD OF PRIESTHOOD CHILDREN!!

BIRTH CONTROL IS SINFUL IN THE CHRISTIAN MARRIAGES and also ROBBING GOD OF PRIESTHOOD CHILDREN!! by Ms. Elyzabeth Yanne Strong-Anderson is a difficult book to characterize, primarily because we haven’t read it. It’s cost, $140, prevented us from doing much more than looking at its cover. What we can say is that it is religious in nature and that it is penned by a woman with deeply held beliefs and, perhaps, an issue with the Caps Lock button on her computer. From close scrutiny of the “Look Inside” feature that Amazon offers, we can tell that the book is written entirely in capital letters, makes liberal use of the imperative mood and favors punctuation more often found in computer languages than in English.

“The haters here are “gonna hate,” but you should know that this new edition is WAY better than the first edition of the book, which was written entirely in human excrement on the interior walls of the Athens Lunatic Asylum in Athens, Ohio.”

“I purchased this book because it was one of only three I could find with two exclamation marks in the title.” 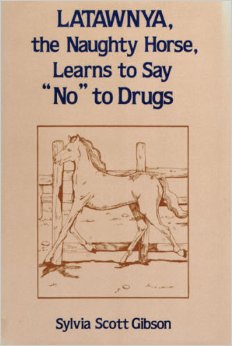 Latawnya, the Naughty Horse, Learns to Say “No” to Drugs

It seems like all we hear about lately are horses’ lives, ruined by drugs.  So many of us are touched by this epidemic and feel helpless to stop it. Latawnya, the Naughty Horse, Learns to Say ‘No’ to Drugs by Sylvia Scott Gibson is a timely and much needed look at the subject of equine drug abuse, with useful insights into the disease of addiction, like “drugs are bad” (p.3) and “using drugs is not a good idea” (from the poem in the preface). Contains helpful, nuanced advice on the complicated issue of substance dependence like “Just say no.”

A Look Inside the Book:

“I used to be an alcoholic, drud-addicted AND naughty horse.
But thanks to this inspired work,I am not a horse anymore.”

“On the surface, Sylvia S. Gibson’s stirring account of equine tranche de vie is an eye-opening page-turner. When picked up for the fourth and fifth time, however, the story is far deeper than initially expected. These horses represent humanity, and they are smoking drugs. WE are smoking drugs. Gibson is a wordsmith, subconsciously compelling the reader to put oneself in Latawnya’s hooves.” 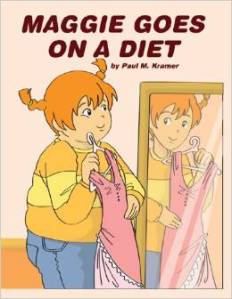 Maggie Goes On A Diet

Aimed at children age 6 to 12, Maggie Goes on a Diet by Paul M. Kramer tells the story of a girl who is bullied for being overweight, loses weight, and then becomes popular. If you’re a parent looking for ways to shame your child about her body, you will love this book. It can be hard to make children as young as 6 aware that their worth as human beings is based on how they look, so any help is truly appreciated. It’s never too early to start binging and purging!

A Look Inside the Book:

This ad, from the book’s sales page, suggests that the body image shaming might best be started as early as 2.

“It’s horrible things like these that cause little girls to grow up insecure about their bodies. You, sir, are an awful person.”

Your Book on Our Homepage: Donate to be Featured.

Whether you're looking for books to read, self publishing resources, book marketing ideas or book news, Readers+Writers Journal provides the best of the literary web.
%d bloggers like this: